Home / Four-core cables – Why these should be avoided in drive installations?

Four-core cables – Why these should be avoided in drive installations?

This Quick and Easy Guide is a must have for any engineer who uses Variable Speed Drives!

Many installers prefer using four-core cable, as this is the traditional way for many installations and also because it provides an element of convenience, with the earth lead already included within the cable sheath.

However, when earthing a drive system, two aspects need to be considered – personal protection and EMC. The protective earth exists to provide a low impedance path to ground for any 50 Hz current. Similarly, the functional earth for EMC compliance needs to provide a low impedance path to earth for any high frequency current. With a bit of planning, both objectives can be achieved with the same earthing system.

In a three-core cable, the cores are symmetrically arranged and so are the magnetic fields that surround each conductor. With a four-core cable, the lack of symmetry can cause current to be induced in the earth conductor and propagate through the system. 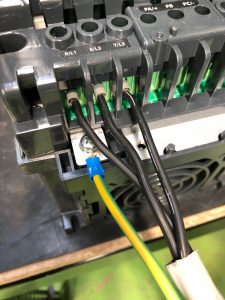 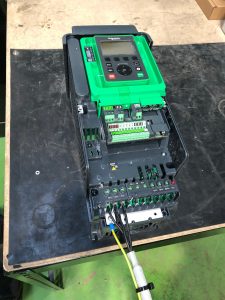 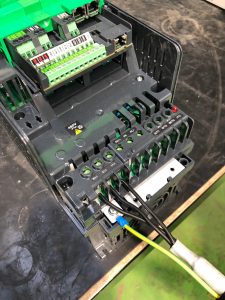 An earthing system to provide both personal and functional earthing should include a three-core supply cable combined with earthing by stranded or braided copper conductors and an external equi-potential bonding cable.

Another earthing practice likely to cause disturbance is when the earth cable is terminated on the earth bar of the drive. While this may seem simple and intuitive, it does not address the need for functional earthing of the enclosure. The earth conductor needs to be terminated at the PE terminal on the VSD metalwork, as well on the PE terminal of the motor. Similarly, the cable braid , or armour, should be terminated at the VSD metalwork. This provides functional earthing and by cross bonding from the VSD metalwork to the enclosure earth bar, safety earthing requirements are met, while ensuring good EMC performance.

A further aspect of good practice is not to use cable above 185 mm2, particularly if the cable is steel armoured. The steel armour has an increased impedance. due to the wire diameter and the skin effect, which causes current to flow near the surface of the conductor. Where larger cross section cable is needed, parallel cables should be used.

If four-core cable must be used for one reason or another, the fourth core needs to be disconnected and insulated at both ends; it should not be used for the earth. Instead, a separate external earth conductor needs to be installed. All of these measures are aimed at providing a lower impedance return path for the high frequency current to the VSD, rather than through the local earth network, possibly via another  device that is susceptible to electromagnetic interference.

We provide 24/7 Technical Support to engineers, our dedicated Support line is available 8am – 5pm every day, manned by one of our fully qualified engineers.

Out of hours, we have 4 Drive Engineers on call 24/7 to support our customers.

If you need Technical Support any time day or night, give us a call on 0330 9000 247 for direct access to one of our engineers.

What is the recommended maintenance schedule for Variable Speed Drives to reduce downtime?

Variable speed drives (VSDs) are now more efficient, productive, and easy to use than ever before, but efficiency levels

Recently, you may have noticed long delays in many items being delivered throughout the UK  leading to empty supermarket shelves

How can I tell the age of a Danfoss VLT Drive from their serial number?

With the rising costs of energy and growing concern about climate change, any energy-saving solutions in industrial plant and commercial